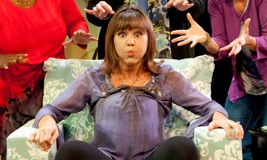 When it’s not cracking wise, which is most of the time, “Motherhood” is a slick, polished work that embraces genuine sentiment without becoming manipulatively sentimental.  It disguises itself as nothing more than an entertaining evening of chuckles and tears.  But without overreaching, Fabisch plugs into the universality of human experience.  – Bill Hirschman, Variety

It’s a comedy roast of motherhood, jam packed with over 20 songs all within an hour and a half of pure entertainment.  Fabisch leaves nothing out and no subject is off-limits for the cast of four talented ladies to sing, dance, hug or cry with each other.  – Bonnie Daman, The Column, Dallas-Ft.Worth, TX

Sue Fabisch pushed the diaper-stuffed envelope with her hilarious show, Motherhood the Musical.  Rather than resting her laurels on the usual mommy experiences to get a laugh, the Nashville-based songwriter put some muscle into this baby. – Kathy L. Greenberg, Tampa Tribune

Amid the humour in Sue Fabisch’s beautifully written script and lyrics is an emotional rollercoaster representing the highs and lows of parenting as four first-class performers each relate their character’s story. – Cheryl Threadold, Melbourne Observer

From tantrums to tears, this sure-fire hit documents the madness and magic of motherhood through comedy and song. – Richard Watts, Citysearch, Melbourne Australia

If you’re a mother, or have a mother, this show is a hoot to watch: young and old all can relate to it.  – Gordana Andjelic-Davita, Arts Hub, Melbourne, Australia

Finely polished Motherhood the Musical is a smash hit with big potential…We could go on describing this but the odds are good that you’ll see it yourself.  Motherhood the Musical will be required viewing for groups of women on a girl’s night out for many years to come. – Bill Hirschman, South Florida Theater Review 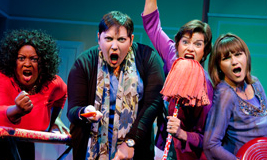